“There’s a man down on main street, eyes all aflame, laughing in the thunder of the Number 9 train” 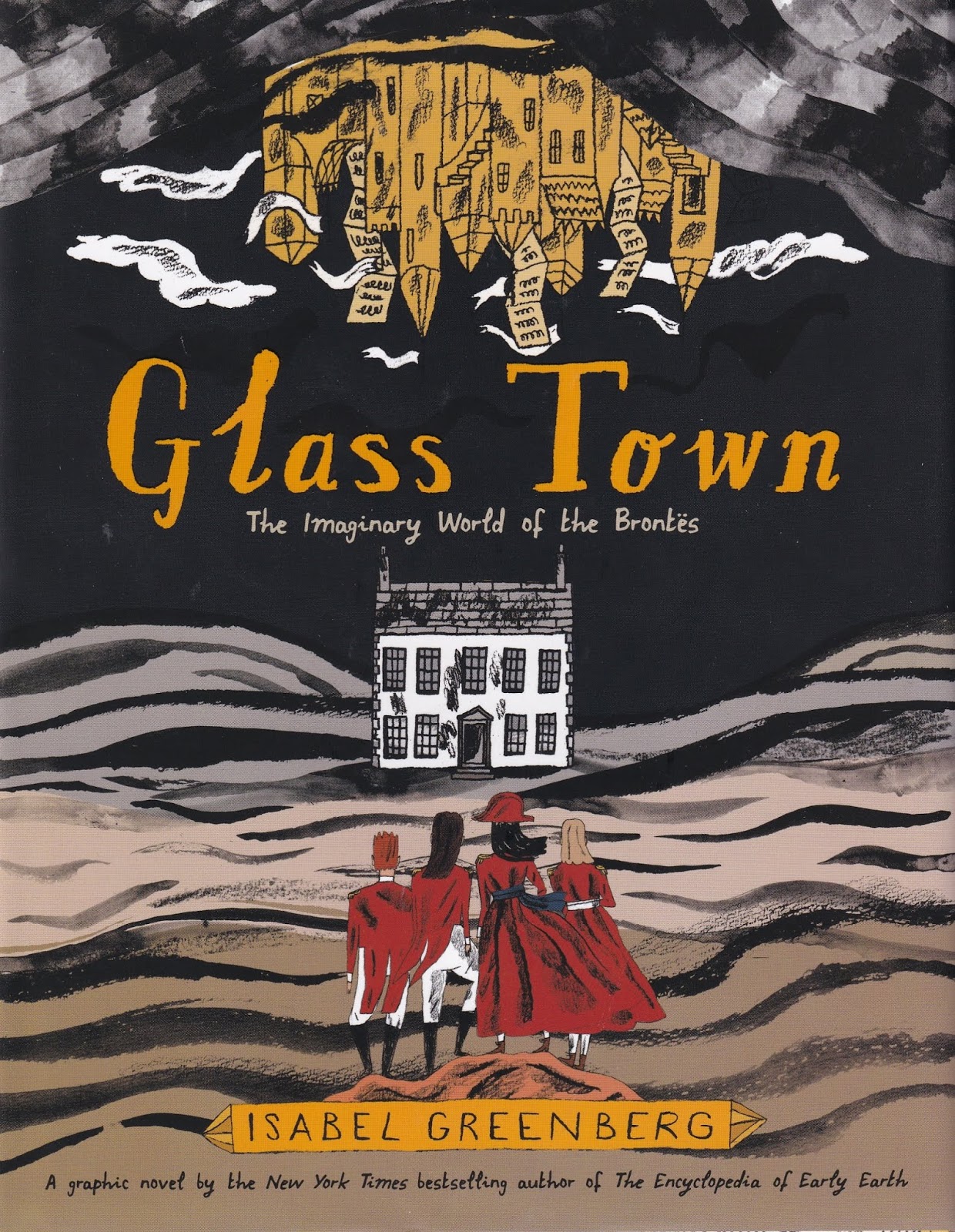 The Brontës have come back into fashion (although I suppose the argument could be made they never fell out of fashion), especially, from a genre-fiction kind of perspective, due to their childhood imaginings of made-up worlds, which have become more and more of interest to people who might not really enjoy Jane Eyre or Wuthering Heights (both of which are terrific books, in case you haven’t read them). So we get Isabel Greenberg‘s latest graphic novel, Glass Town, which is about that imaginary world and its effect on the siblings. 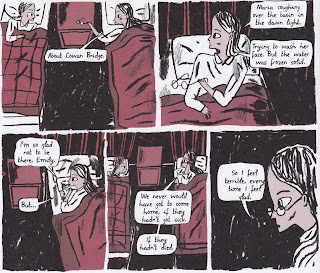 Glass Town is published by Abrams Comicarts, so it’s all fancy, don’t you know.

Charlotte is probably the most famous and accessible of the Brontës, so Greenberg uses her as the point-of-view character, with the others playing supporting roles (Charlotte also outlived her siblings, so she can be last on stage, so to speak). She tells the story in flashback to one of her imaginary characters, so there’s already a layer of unreality to the book even before she and her brother and sisters start creating. We begin right after their second funeral in a few months, as their other two sisters died very young (they were 9 and 10), leaving Charlotte the oldest but Branwell claiming primacy because he’s the boy. Stuck at home (the girls got sick at school, so their father decided to keep them home) and out on the edge of the moors, the children slowly begin to create a world that they populate with characters they find interesting. All is well for a time, but Branwell and Charlotte begin to dominate Glass Town and the surrounding areas, so Emily and Anne eventually start their own world. As Charlotte is telling the story, we never hear about those lands, because Emily and Anne didn’t allow the older two siblings to “visit.” Charlotte leaves and becomes a teacher, with Anne as one of her students, but she can’t completely leave Glass Town, and this becomes more her reality, especially when she realizes that the some of the characters have realized they’re “fictional” and are acting in ways she and the others never expected. This leads, of course, to her imaginary character visiting her at the beginning of the book.

Greenberg does a nice job shifting between Charlotte’s life and the events in Glass Town. We get a long story about the characters and their soap-opera existence, as the main character, an attractive cad, stirs the pot and makes trouble for everyone. 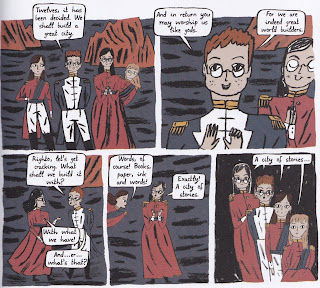 Charlotte’s descent into quasi-madness is handled well, as she becomes more attracted to spending time within the story of Glass Town, finding real life to be dull and tragic. One reason Emily broke away from the older siblings is because she didn’t want to resurrect characters, but Charlotte thought part of the point of an imaginary world is so people can come back to life. It’s the tragedy of the book – Charlotte muses how different their lives would have been had their two older sisters not died, and she also believes it’s her fault, so a world where people can be resurrected would appeal to her, while Emily understands the way real life works and accepts it. Branwell, too, lives in a fantasy, but one a boy would like, full of military action and colonization of the “indigenous” people of Glass Town, and Emily and Anne rebel against that, too, as they get older, realizing how nasty a fantasy it is. Charlotte believes in fairy tales more than her sisters, and this blinds her to the real world until it’s almost too late. The fascinating thing about the book with regard to the famous works of literature that the ladies produced is that, while mentioning Jane Eyre or Wuthering Heights only in passing, Greenberg shows how Charlotte would write the former and Emily the latter.

There’s a lot going on in the book, and I don’t want to get into all of it, because it would ruin the fun. It’s a beautifully told story, with madness underlying it, guilt shot through it, addiction and yearning for something more a major theme, and family ties – both good and bad – looming over everything. 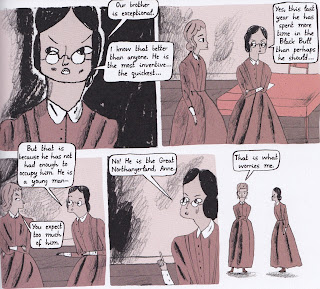 Greenberg tackles it all very well, switching easily from fantasy to reality and linking them nicely, while also keeping them separate enough so we get the sense of the siblings becoming unmoored from this world and the terror that might inspire inside them and to others watching from the outside (there aren’t many outside observers in the book, but the sense is still there). She even gets into the idea of artistic genius and the smugness that comes with it, without taking away from the obvious brilliance of the sisters’ works (she doesn’t get into the books very much at all and there’s nothing about Branwell’s art, but the way the siblings create the world, it’s clear they’re very good at what they do). There’s just a lot going on in the book, and Greenberg gets to big ideas while still making it a gripping and somewhat tragic story (beyond the fact that all six Brontë siblings died before they reached 40).

Her art is interesting, as well. She uses heavily inked, rough pencils (or perhaps just thick brushes) with a lot of smudging to give the world a very harsh look, which works well for the wilds of Yorkshire and the sparseness of the school where Charlotte works. Her characters also look toughened by life, both by the events they’ve lived through and the places in which they’ve lived through them. The book takes place in the 1820s-1840s, and even someplace nice like the Brontës’ house would feel dingy, based on the way it was lit and heated, while the people could wear nice clothes but they would probably be a bit shabby. Greenberg gets this, and while everyone is dressed well, there’s still that sense of dirtiness that would be prevalent at this time. When we get to Glass Town, everyone is dressed like aristocrats, but they’re still presented as a bit shabby. 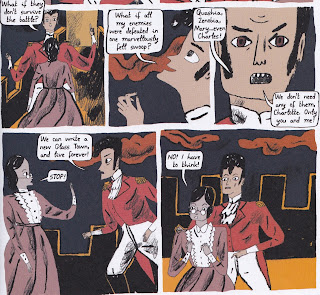 The coloring does change, which is a smart thing, as it’s a fantasy world, so the colors pop a bit more and stand in nice contrast to Charlotte’s drab world, and the warm colors Greenberg uses help create the sense of the tropics, which is one reason why Emily and Anne want to start their own world (they want a different climate). The brighter colors also heighten the luridness of the story, and we begin to understand why Charlotte would want to spend so much time there – everything feels more alive, despite the fact that it’s not real. Greenberg is already making a contrast between the real world and the fantasy world, and the art and coloring help make it starker. When Charlotte “enters” Glass Town, Greenberg doesn’t make her fancier, so the contrast is even clearer. I’m not sure how deliberate this is, but Greenberg’s characters are also a bit more angular than the “real” characters, giving them a harsher but also slightly more dashing look, which also highlights their “unreality.” The “real” characters in the book are a bit more rounded and softer, as they don’t smash through life doing whatever they want like the denizens of Glass Town. I’m going to assume it’s deliberate, because it’s fairly interesting and subtle.

Glass Town is one of the better comics I’ve read so far this year, and it makes me want to go get more of Greenberg’s work (she’s done two other graphic novels, but I didn’t get them). She creates two fascinating worlds, and uses the historical setting to make deep points about life, the desire to escape a tragic world, the consequences of that desire, and the difficulty we occasionally have facing the real world. It’s a book that makes you stop and think about it a lot, but it’s also pretty gripping, which seems unlikely when you learn what it’s about but doesn’t seem too shocking after you’ve read it. Even if you’ve never read Jane Eyre or Wuthering Heights (and if you haven’t, shame on you, because, as I noted above, they’re both brilliant), you can appreciate a comic like this. I encourage everyone to check it out!