When Gorilla City is haunted by a ghost, and Flash’s speed isn’t enough to help …

When yet another crook tries to make Perry White think he’s seeing Great Caesar’s Ghost or a phantom haunts the Super-Friends’ Hall of Justice — well, who would you call to pull the mask off the ghost but Scooby-Doo and his friends? Heck, even other ghosts want their help! 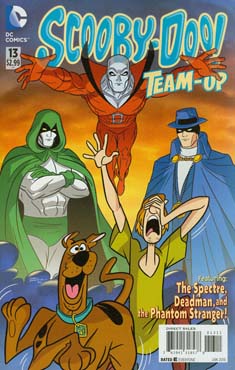 Welcome to the world of Scooby-Doo Team-Up by Sholly Fisch and (mostly) Dario Brizuela. It takes place on some parallel Earth where DC’s superheroes coexist with the characters of 1960s Hanna-Barbera cartoons. The DC side is something of a “greatest hits” version where GA and GL are discovering America, Black Canary’s already joined the Birds of Prey and the Teen Titans are the Teen Titans Go version (“Robin seems very different from when he’s with Batman.”). Alongside them we have rabbits and horses working as sheriffs, a squirrel working as a secret agent and a police station janitor who’s secretly a martial-arts legend.

The premise, of course, is that as Scooby and his friends are the world’s best ghostbusters (regrettably they never had a Dr. Thirteen team-up) superheroes and cartoon characters alike turn to them when a haunting happens. The kids apply their patented moves — run in terror, then pull off someone’s mask — to expose the fake ghost, and it’s always a fake ghost. Well except the Deadman/Phantom Stranger story; fortunately the ghosts convinced the kids they’d just dreamed the adventure so they didn’t freak out about spooks being real.

Within that basic formula, Fisch does a good job coming up with fun plots. There’s more fun in watching him handle the characters, like Hal Jordan rolling his eyes when Ollie goes into a “moral cancer on America!” rant. Or squeezing even the most obscure ghost characters, such as the Ghost Patrol and the Grim Ghost, into the Deadman story. Or bringing the Inferior Five, Stanley and His Monster, Angel and the Ape and the Maniask into one yarn — despite which the villains would have gotten away with it if not for those meddling kids Sugar and Spike!

On top of which there’s a ton of Easter Eggs and in-jokes. Green Arrow declaring “Scooby-Doo, you have failed this city!” Fred Flintstone telling the time-traveling kids he’s glad they arrived for dinner instead of breakfast (“Barney’s always swiping my cereal.”). The gang realizing the rock group the Impossibles couldn’t possibly be the same people as the superhero Impossibles — that would be the stupidest secret identity ever!

That, though, brings up one weakness of the book: I’m not sure how well it would work for anyone who doesn’t know the characters already. Are there many millennials or even Gen Xers who care about Ricochet Rabbit, El Kabong or Top Cat? Or even know who they are? Even as someone who does, the Hanna-Barbera characters don’t always work for me. Some of them, like Top Cat and Secret Squirrel, don’t make for interesting guest stars, nor do they have the kind of history that lends itself to Easter Eggs. Their stories just fall flat.

But most of them rise. It’s a fun book and after six TPBs, I look forward to collecting the rest of the run.