When it comes to the DC heroes, there has always been the traditional question: Superman or Batman?

Now, I’ve generally been on team Batman. I’ve pretty much been current on the Batman comics from the days of Adam West all the way to the present, with only a brief hiatus in the early 1980s and another one about seven years ago when Scott Snyder would NOT let up on the Court of Owls (and even then I had Batman ’66 to tide me over. Full circle.)

Never been as interested in keeping current with his stories as with Batman’s, but I’ve always had a soft spot for the big guy’s adventures. I admit it. Adam West lit the fuse, but the real gateway drug for me and superhero comics was Saturday morning TV, back in 1966-67. Superman, in particular.

The transition from the Filmation cartoons to the comics version of Superman was possibly the easiest on-ramp ever. Certainly it was for me, as a child of six.

Especially since the Superboy mythos was included in the Filmation cartoon as well.

Again, pretty much seamless going from TV to print. Not surprising since DC guys like Bob Haney and George Kashdan were doing a bunch of the cartoon scripts as well.

The comics were just a hair more complex than the cartoons, which made them more interesting. I was all about the DC Giants back then, and the Superman ones often did theme issues based on various bits of Kryptonian lore; so they had a great science-fiction vibe going on. (Not surprising since a great many of those stories came from SF stalwarts like Edmond Hamilton and Otto Binder.) At the same time I was also discovering things like Danny Dunn and the Heinlein juveniles in the school library, so it was all of a piece.

But time passed, and gradually I got to feeling that it was time to put away childish things. I was going to be eleven, after all. I had begun to think that maybe Adam West had been pulling my leg. It was bad enough when the other kids at school jeered at me for liking Batman, but when Batman himself was doing it…

And compared to what Marvel was doing, Superman was starting to feel like kid stuff too.

Then the most amazing thing happened. (Well, maybe not that amazing; DC was feeling the pressure from Marvel.) But the upshot is that Batman and Superman both got a coolness upgrade.

Now there have been countless magazine pieces and blog posts about what a big deal it was when Denny O’Neil and Neal Adams (and Frank Robbins and Irv Novick and Dick Giordano, as well) returned Batman to his roots. I’ve even written a few myself. We all know about that stuff. It’s constantly being reprinted in various collections. 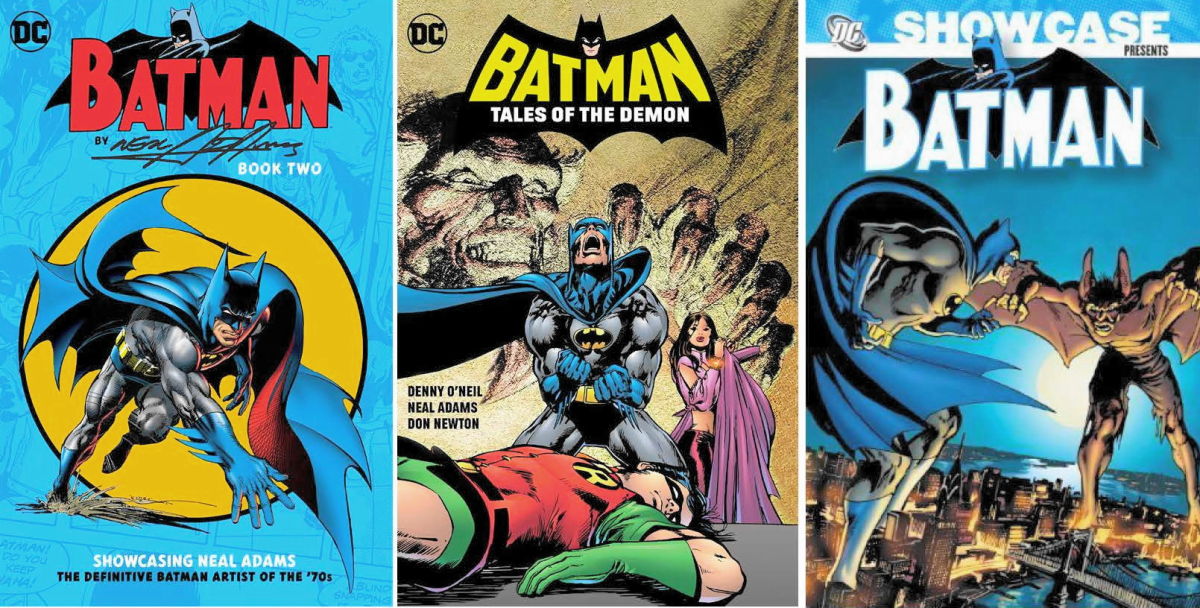 But Superman got a revamp as well, and that doesn’t get nearly as much love.

Oh, sure, the issue that launched the new look has been reprinted a lot. It’s in all sorts of Best Of collections and so on. The cover is one of the most famous ever to appear on a Superman comic.

But that was only the first part of a multi-part epic, one of the most ambitious Superman stories ever done up to that time. I’m pretty sure that when it came out it set the record for a serialized Superman story in the actual comic books (though in the 1940s the newspaper strip and the radio show went long all the time.) It climaxed with an apocalyptic battle between Superman and his alien-sandman double that just fried my little eyeballs when I got it off the stands. I didn’t even mind the cheat O’Neil used to get out of it.

That story’s only been collected once in its entirety, and both the hardcover and paperback are out of print. (Still available used, though.)

And of course the Kirby run on Jimmy Olsen is legendary, and a trade paperback evergreen.

But that enduring presence is about Kirby, not Superman.

My point is, there was so much more than those two components to the 1971 relaunch. Here is a house ad from that time…

I’d like to call your attention to the bottom tier, there. “Changes in the Superman family of magazines.” Leading off with Kirby on Olsen, sure. DC was promoting that everywhere.

Although they loved dropping Jack Kirby’s name, they were curiously reticent about his art. Many of you probably know DC had Murphy Anderson go through Kirby’s pages and redraw Superman’s and Jimmy’s faces to make them more consistent with what had gone before. Sometimes they didn’t use Kirby’s work for the cover or even in the ads.

But the other groovy revamps were a lot of fun too and most of them have never been reprinted.

For example, Mike Sekowsky’s re-imagining of Wonder Woman as Emma Peel gets almost as much fan press as Kirby’s Olsen, and it’s gotten a nice series of paperback collections and even a new hardcover omnibus as well.

What no one seems to remember is that at that same time, he was doing the same for Supergirl. I actually like that stuff better than his Wonder Woman. Sekowsky on Supergirl in Adventure was lit. It careened wildly from ham-handed seventies relevance to collegiate soap opera, but it was the most exciting the strip had ever been. And Sekowsky’s willingness to let fans come up with costume designs he would actually use in the stories helped too.

The feminist movement was starting to be a thing, and certainly Lois Lane wasn’t going to be left out of that.

Though I have to admit that even with a newly-raised consciousness, Robert Kanigher was still kind of insane. The poster child for well-meaning-but-horribly-awkward social commentary in 1970s comics, to this day, is his attempt at putting Lois Lane in the thick of hip, happening race relations: “I Am Curious (Black).”

But the real star of the book was the backup strip: Rose and the Thorn, the story of a superheroine whose civilian persona had no idea she existed, and vice versa. You could tell DC editorial thought this was the strongest part of Lois Lane as well, because that was the strip that got all the love in the house ads of the time.

It was Kanigher, so it was still nuts, but in a good way.

Certainly Rose and the Thorn deserves a collected edition of some kind, although I have to admit I’d be all over a book of the deranged Lois Lane stories of the time as well.

Part of what made all of this so exciting to eleven-year-old Greg was the sense that for the first time in a long time, the Superman books weren’t just coasting. The creators were swinging for the fences. It wasn’t just ‘relevant’ storylines. It was a whole attitude. Little things like stuffy Clark Kent, while still mild-mannered, being allowed to be more of a person, and even change his clothes. Seriously, this made the news.

Relevance was in. Campus unrest, in particular, showed up everywhere. (I could probably do a whole column just on those stories.) Even though the comics were still ostensibly aimed at kids and subject to the Comics Code, DC was definitely trying for an older audience with the ripped-from-the-headlines approach.

Sometimes you’d get leadfooted grandpa’s-trying-too-hard stuff from Robert Kanigher or Bob Haney, but just as often there’d be twentysomething newcomers like Mike Friedrich or the aforementioned Denny O’Neil doing stories for folks their own age.

Has it aged well? Mostly not (not even the celebrated Green Lantern/Green Arrow, honestly) but seeing it with Superman, the character that was literally the symbol of the superhero status quo, was exciting.

Possibly my favorite Superman book of the groovy era was the revamped World’s Finest.

The stories were all over the place. Sometimes you’d get relevance from Mike Friedrich…

And other times you’d get crazy shit from Steve Skeates like Superman and Aquaman versus the dolphin people.

But the thing I loved about it was just seeing Superman teamed with a variety of other heroes. Even at the age of eleven it seemed weird to me that Superman would team up with Batman all the time. They just weren’t in the same weight class. It made a lot more sense to me that Superman, whose remit was global after all, would bump into all sorts of other heroes. Sometimes even from different Earths, like the cosmic epic with Doctor Fate.

That was my first exposure to the writing of Len Wein, who became a lifelong favorite. With this run of World’s Finest, it was musical chairs on the writing but the art from Dick Dillin was always a constant and it was always great.

For whatever reason, none of this lasted. Denny O’Neil, by his own admission, wasn’t a good fit for Superman and left the book after his Superman-sand-duplicate epic wrapped up. Even the mighty Jack Kirby couldn’t make a go of Jimmy Olsen and went on to other things after fifteen issues. Likewise, fans weren’t ready to accept a version of World’s Finest that wasn’t Superman and Batman and it returned to its original format after only five issues more than Kirby’s Olsen, with #214. (Even though DC Comics Presents, a few years later, lasted for years with the exact same Superman/rotating-guest-star premise.) Lois Lane and Supergirl were both canceled and folded into the revamped Jimmy Olsen, now called Superman Family.

The stories themselves became much more traditional in approach, as well. Certainly they were well-done– writers Cary Bates and Elliott Maggin did some great stuff, and artist Curt Swan was always good. But they were definitely coloring inside the lines. The era of experimentation was over.

But, as gonzo as it got sometimes, it was sure great while it lasted.

As for what prompted this reminiscence? Why, it’s this new hardcover. World’s Finest: The Guardians of Earth.

It’s a little spendy, but I pre-ordered mine at a deep discount a few months ago. I’m informed it’ll be arriving in the next few days and it’s almost embarrassing how pleased I am about this.

After all, if these World’s Finest stories are finally being reprinted, dare we hope that Rose and the Thorn and mod Lois Lane are on deck?

Back next week with something cool. Wash your hands in the meantime.