Like most of you, I have a platonic ideal of certain characters that I carry around in my head. And a lot of times, it has to do with who I saw play a particular part when I was at an impressionable age. I’ve had a few of them bouncing around in my head this week, so I thought I’d share.

Although I love many of the folks who’ve played the role like Basil Rathbone, Peter Cushing, and Benedict Cumberbatch, my personal ideal Sherlock Holmes is Jeremy Brett. It happened even before I started watching him as Holmes on the Granada series in the 80s and 90s. I saw his picture in a TV Guide article, and he just immediately seemed right to me. 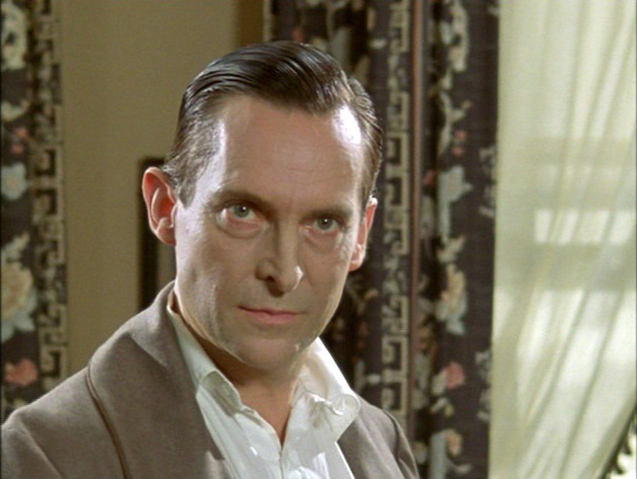 Brett has a piercing gaze and unusual features, both of which I feel are absolutely essential for Holmes. He’s not classically handsome, but you can’t look away from him. Just as Holmes stands apart from the rest of us, Brett has a face that stands out in a crowd. I honestly don’t think I’ve ever seen anyone else with a nose like Brett’s. 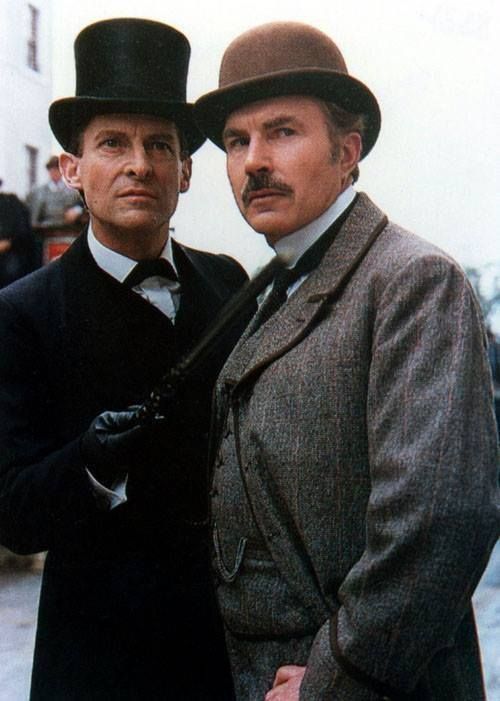 And David Burke is the guy I picture when I think of Watson. Nondescript enough to blend into a crowd and be our everyman POV into Holmes, but still young and handsome enough to be the ladies man that Arthur Conan Doyle described. As I’ve talked about here before, it takes a lot to bring Watson to the screen and make him interesting and capable in his own right, but Burke made it look easy. He’s probably my favorite interpreter of the part. 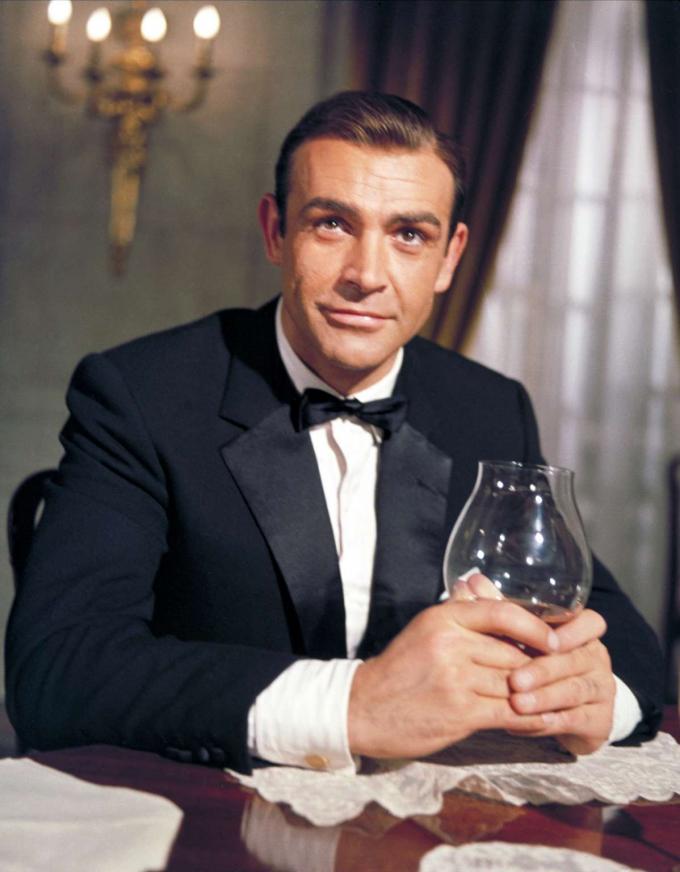 I feel like Connery was the perfect age for Bond in that film, old enough to have some experience under his belt but still at the peak of his attractiveness (It also helps that Connery hadn’t grown bored with the part yet). He’s a handsome guy, but he’s also got a bit of roughneck quality, and you just know he could beat up anyone else in the room if he put his mind to it. It’s the same quality I like about Daniel Craig’s Bond.

But sometimes, when I’m imagining the Book Bond, the guy from Ian Fleming’s novels, I picture the guy that Mike Grell drew in Permission To Die, who’s also the guy that Ian Fleming described Bond as looking like a few times: Hoagy Carmichael. 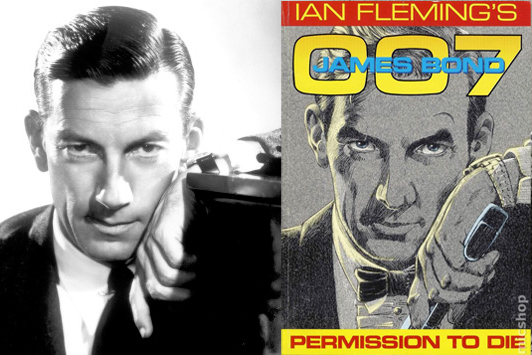 While Grell clearly took some inspiration from Carmichael’s face, he still injected a bit of Connery into his Bond. And Grell also made sure to add in the cheek scar and comma of hair hanging down that Fleming always described.

My ideal Tarzan is Joe Kubert’s. Kubert’s raw and spontaneous style was just perfect for the jungle man, and that’s still who I picture in my head when I’m thinking about Lord Greystoke. 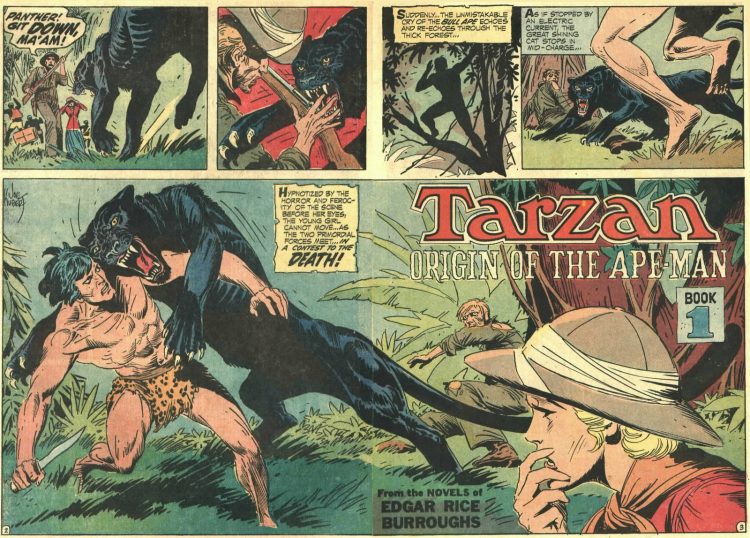 Kubert’s Tarzan was tough and athletic without looking like a musclebound bodybuilder, and I think that’s essential to the character. And the sloping brow and melancholy eyes that Kubert gave him always reminded you that the ape man was half-civilized and half-savage, a product of two worlds who was fully at home in neither. You can keep your Burne Hogarths and your Russ Mannings. Too slick and too pretty. For my money, Kubert’s Tarzan is the definitive version of the character (although I’ll definitely give an honorable mention to Neal Adams’ Tarzan, which shares a lot in common with Kubert’s version).

Christopher Lambert from 1984’s Greystoke: The Legend of Tarzan, Lord of the Apes looks enough like the Joe Kubert Tarzan that he’s the live-action actor who looks the most like the character to my eyes. With that brow and those almond-shaped eyes, Lambert looks like a Joe Kubert drawing come to life.

For the Lone Ranger, there’s really only one choice: Clayton Moore. 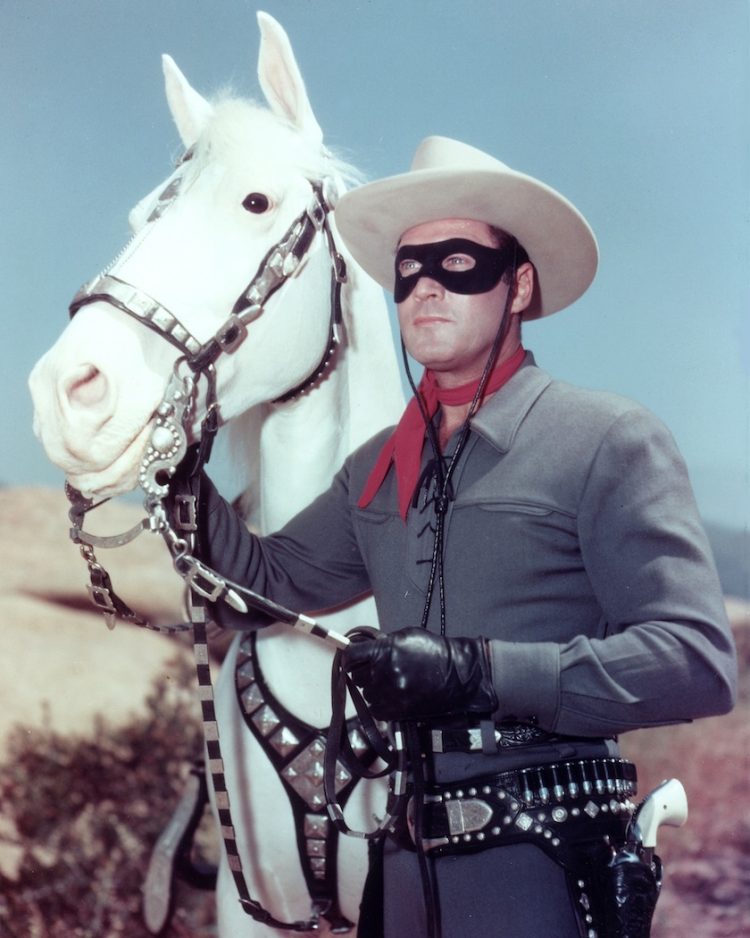 Moore was one of those actors who just utterly embodied his role, doing his best to live up to the ideals of the Ranger in his real life. He was The Lone Ranger from the 1950s onward, so much so that when the producers of 1981’s The Legend of the Lone Ranger sued him to prevent him from wearing the Lone Ranger mask in public, fans revolted and ensured the movie flopped. No one who’s played the Ranger since Moore has really been accepted by the general public, not John Hart, not Klinton Spilsbury, not Chad Michael Murray, not Armie Hammer. And considering that it’s been 60+ years since Moore last played the part, that’s pretty damned impressive.

Moore was a great choice for a western hero, good looking but just rugged enough that you believed he could handle himself on the frontier. And he looked great in the mask. Some people just have the types of faces that look really good in masks, and Moore was one of those people. It’s no wonder he spent decades wearing it outside the part. 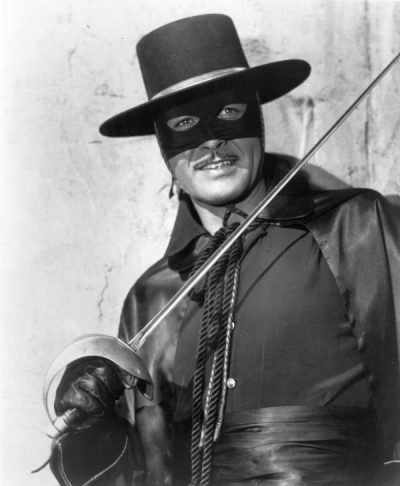 My ideal Zorro is a bit of an odd choice, considering that I’ve only seen a few episodes of the 1957 Zorro series from Disney, but Guy Williams is the person who looks the most like my conception of the Fox.

Williams had a classically handsome face, which is appropriate for a charmer like Don Diego de la Vega. And like Clayton Moore before him, Williams just had one of those faces that looks really good in a mask. I also like the cut of his costume: Simple, direct, and no frills, not decorated with gold trim everywhere the way Antonio Banderas’s Zorro costume was.

My next choice is another classic swashbuckler: Errol Flynn as Robin Hood. 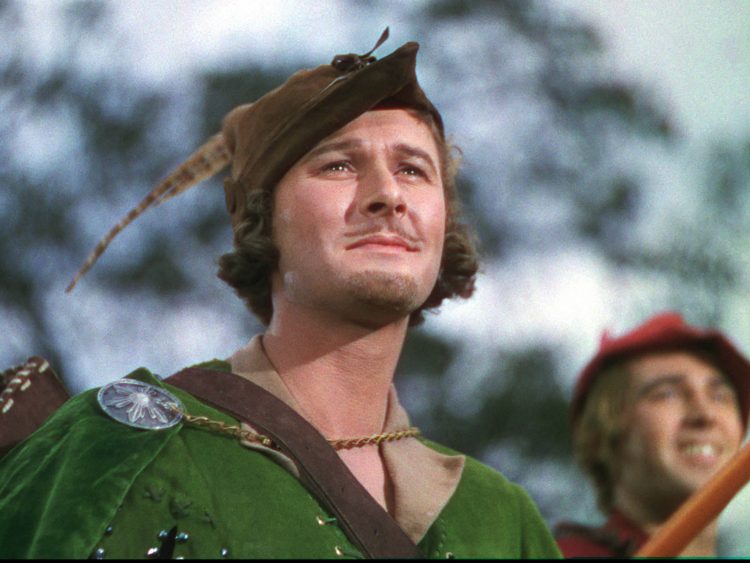 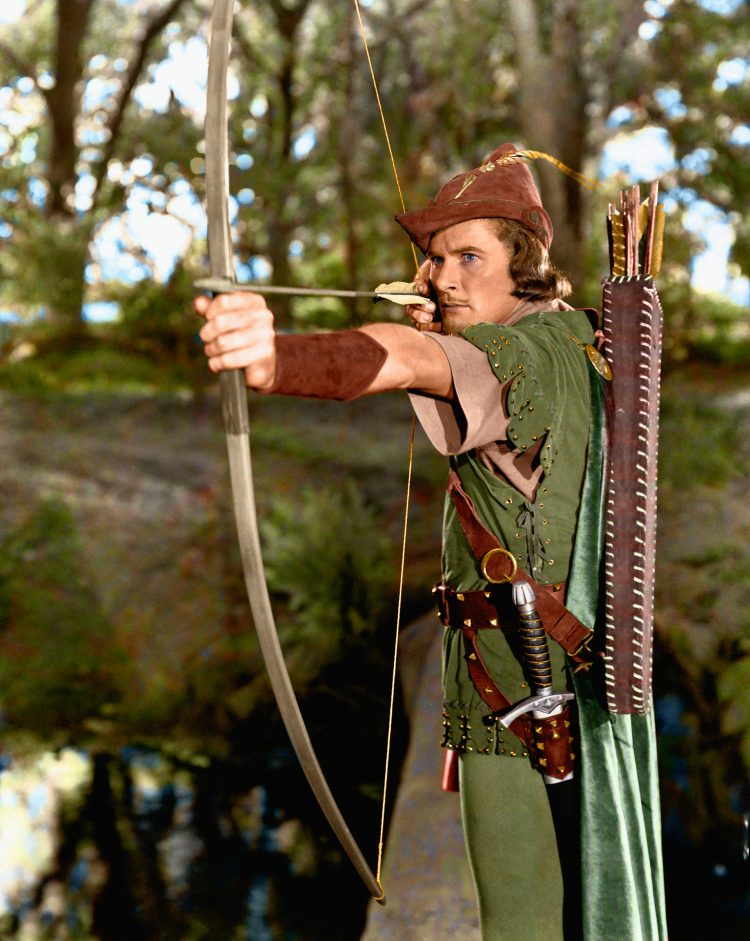 Flynn’s Robin Hood just had the sort of zest you want from that character. He had a flair for action scenes, and swagger for days. When Flynn’s Robin Hood went up against the throne of England, you actually thought he had a shot at winning. And even though he had a serious cause, Flynn’s Robin Hood never took himself too seriously. He was always ready to laugh, even when the joke was on him. Look at how good-naturedly he takes getting knocked into the water when he first meets Little John.

And yeah, I know that Flynn played an extremely romanticized version of Robin Hood, but Robin Hood is a romantic character at heart. That’s what I want to see. Flynn is perfect as an idealized and larger-than-life hero.

My ideal Count Dracula looks like Gene Colan’s version from the 1970s comic series The Tomb of Dracula. 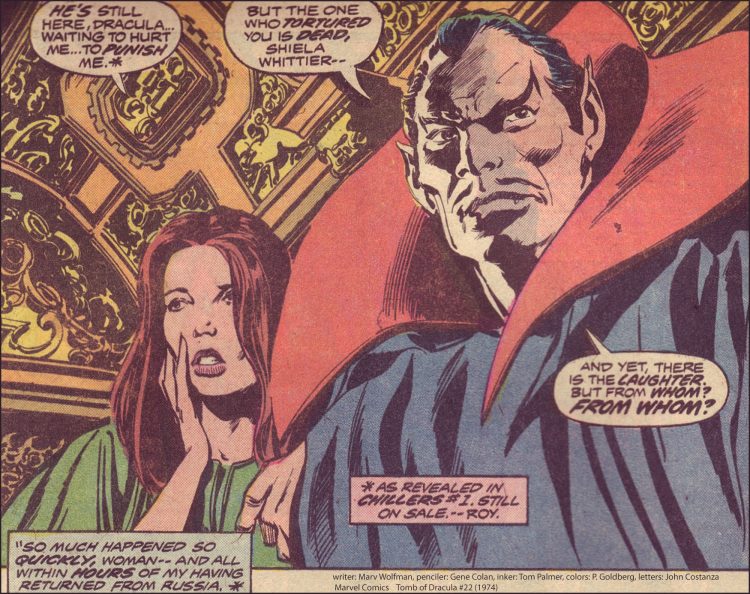 I love that odd face. Colan’s Dracula looks like no one else, and that’s important, because Dracula should be like no one else. Between Gene Colan and Tom Palmer’s visuals and Marv Wolfman’s compelling dialogue, the Count had presence. You could totally see people falling under his spell even in a static medium like comics. Colan modeled his version of the Count after Jack Palance, who oddly enough ended up playing the part in a TV-movie in 1973, the year after Tomb of Dracula debuted. It makes you wonder if Palance was ever aware that he inspired another interpretation of Dracula in the four-color medium.

My next choice is someone who never played his part, but should have: Basil Rathbone as the Shadow. 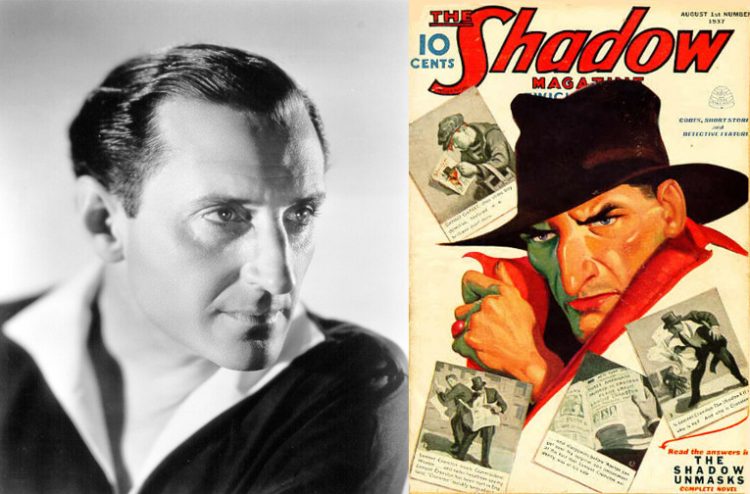 If ever there was an actor tailor-made for a part, it was Basil Rathbone as Sherlock Holmes. But there’s another part that he was just as a great a match for, and it’s a shame that he never got the chance to play it: The Shadow. Lamont Cranston could’ve been a perfect transitional part between Rathbone’s earlier villainous roles and his heroic Sherlock Holmes years, and the Shadow would’ve been well-served by a big budget movie made in the 30s or 40s instead of the forgettable serials they actually made. And who knows? Maybe playing the Shadow could’ve helped Rathbone avoid the typecasting that plagued him in his later years.

With Superman, while the guy I picture isn’t 100% Christopher Reeve, his face is certainly close enough to work for me. My Superman is classically handsome, square jawed with an All-American look, somewhere between Christopher Reeve and Alex Ross’ version facially. Mostly, I imagine Superman moving the way Reeve did, with his relaxed yet confident posture and easygoing nature. And he definitely has the same sort of grace in flight that Reeve had.

And for the Earth-Two Superman, it’s an older George Reeves.

While Christopher Reeve came off as your cool older brother, George Reeves was like your dad. He had a natural paternal quality that gave his Superman an automatic authority in any situation, and I can’t think of anything more appropriate for the first superhero of the DC Universe. While Superman’s first live-action portrayer Kirk Alyn played Superman on the cocky side, George Reeves was eternally self-assured. Reeves’ Superman never seemed too flustered, and never had to sweat too much to get the job done. Why would he? He was Superman, after all.

George Pérez always used to differentiate the Earth-One and Earth-Two Supermen beautifully, and that’s gotten fused into my brain. 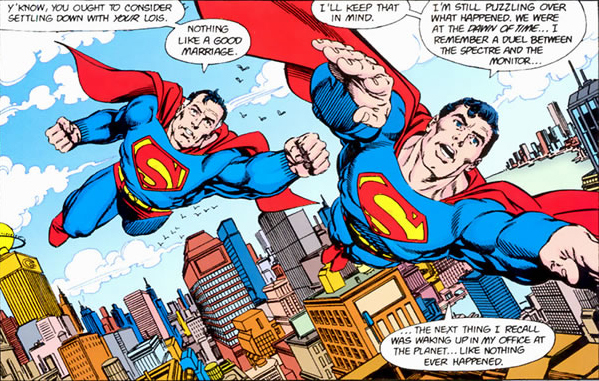 While most other artists just drew the Earth-Two Superman as the Earth-One Superman with grey at his temples, Pérez always made him a little older, a little stouter, and a bit more wrinkled. He even introduced subtle differences into their costumes, with the E-2 Supes having a different emblem, a slightly shorter cape, a higher waistline, and different cuffs at the wrists. You can see in the picture above that Kal-L was also a little less graceful when flying. It was the perfect approach for an older Superman, and it totally fits George Reeves’ no-nonsense approach to the Man of Steel.

It’s easy to imagine George Reeves’ Superman settling down to a life of quiet domesticity with his Lois Lane and evolving into something like we saw in the old “Mr. and Mrs. Superman” feature in Superman Family.

I’ve got a few other choices, but this is getting a little long and I’ve run out of photos for now, so what say we continue this next week, where I’ll talk about my ideal images of Batman, Spider-Man, Captain America, Green Lantern, and others. See you then.

Blatant Self-Promotion Department: Another friendly reminder that if follow any of the Amazon links above in blue, the AJS gets a piece of any purchases you make, even if you don’t order the item we’re linking to. So help us out and place an order. You’ll get some cool stuff and support the site, too.

Who are your ideal images of the characters near & dear to you? Let me know in the comments!

John Trumbull has been reading comic books since 1979 and consuming pop culture since birth. A writer for the Eisner Award-nominated BACK ISSUE magazine from TwoMorrows, John has interviewed everyone in comics from Neal Adams to Marv Wolfman. He's a graduate of the Kubert School, and has drawn coloring books for DC Comics’ licensing department. John has been a stand-up comic since 2011, performing at such venues as Carolines on Broadway and the Broadway Comedy Club. He still counts Captain James T. Kirk as one of his personal heroes. John lives in Parsippany, New Jersey with an ungodly number of comics, books, television, and movies. You can follow him on Twitter at @TrumbullComic.
View all posts by John Trumbull →