“Sentenced to drift far away now; nothing is quite what it seems” 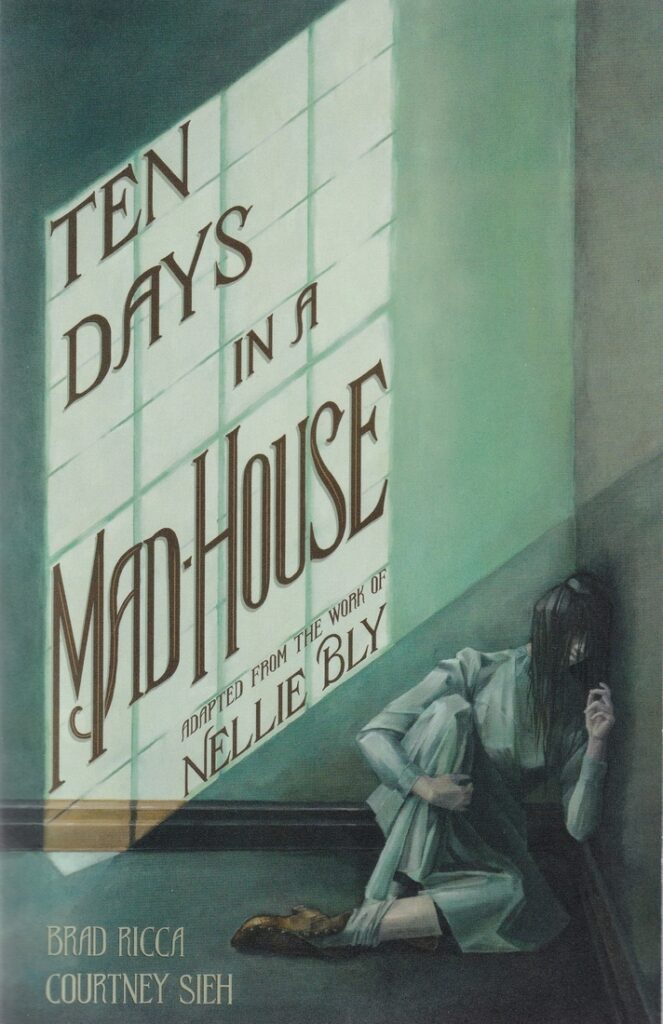 “Adapted from the work of Nellie Bly,” Gallery 13 brings us Ten Days in a Mad-House, which is written by Brad Ricca (I don’t think I’ve heard of Ricca before, but holy crap, after looking at his web site, I want to buy everything he’s ever written) and drawn by Courtney Sieh. 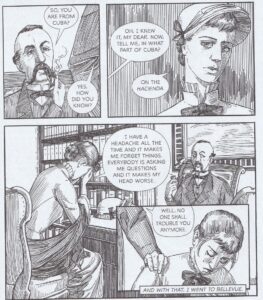 Let’s have a look at this sucker!

There’s the old story about the writer (it doesn’t matter who; the story is probably apocryphal) who went to jail to experience life on the “inside” but was told by a fellow prisoner that he couldn’t really get it because he could leave if it got too tough for him. I think I first heard the story in college, when one of my poetry teachers told it to us, and of course Jarvis Cocker used the idea in “Common People,” but the motif is older, obviously, because it can apply to Nellie Bly, who got herself committed to an insane asylum in 1887 to report on the abuses within it. She was 23 when she went into the asylum, and her articles about it made her famous. But the problem still exists – Bly could have, and did, leave whenever she wanted to. Ricca tries to make it a bit more dramatic than it might have been (Bly narrates that she “had to leave now, while [she] still had the chance,” but there’s never any indication she was going to be held there indefinitely. Narratively, this comic suffers a bit from that – in other stories, the subject might lose their ability to get out, which messes them up, and perhaps they start to think they actually are insane (there’s a reason the Ingrid Bergman movie Gaslight has entered the vernacular as a verb), but neither of those things happen to Bly; despite the fact that she does experience some trauma, she’s always very clear-headed about what she’s doing there. This is based on real life, so I know why Ricca didn’t introduce either of those elements, but it does make the book a little drier.

It’s still a fascinating adaptation of what I’m sure is a fascinating series of articles/book. Bly is a struggling reporter who moved to New York from Pittsburgh (where she had had some success) but found no work, and when she reached the end of her funds, she managed to talk her way into a job with Joseph Pulitzer’s World because they needed a sneaky woman to investigate Blackwell’s Asylum on Roosevelt (then named Blackwell) Island. Sadly, it was not very difficult for her to get sent to the asylum, and she stayed for the titular ten days before getting “rescued” by the editor’s lawyer. 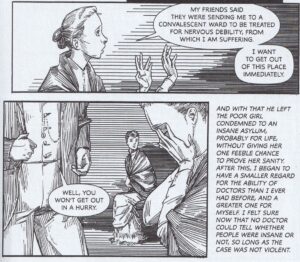 While she was there, she befriended several inmates/patients and learned a great deal about how America treated its “insane” (as, of course, most of the women there were not insane) and how easy it was to put “troublesome” women away and forget about them. This might be the ur-story of the clichéd “creepy asylum,” because of course most of the women are there simply because they were causing “problems” in the real world by not, say, agreeing with their husbands all the time, and of course the nursing staff seems to be made up of sadistic martinets, and of course the (male) doctors are sympathetic to the women but ridiculously patronizing and condescending to them as well. Ricca does a nice job condensing what I’m sure must be a longer text, and we get the major points of what Nellie and her fellow patients go through. The book is a bit wordy, but that’s probably to be expected. It doesn’t bog the book down, but it does seem that occasionally, the art does fine in conveying what’s going on and we don’t need as much text. But that’s just a minor annoyance.

Speaking of which, Sieh does a nice job with the art. Her lines are hard and angular, giving the art a harsh, stilted look that fits well with the tone of the book. She uses hatching instead of chunk blacks, which makes the art look a bit “old-fashioned” – it has a distinct “wood-cut” feel – and also makes it look incredibly textured, so that we can almost feel the harsh fabrics of the late 19th century, and it makes the conditions in the asylum look more brutal because there are no soft edges and amorphous shapes to hide in. 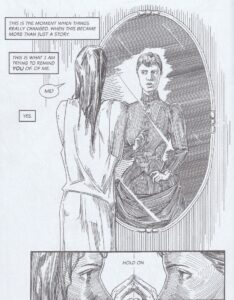 Sieh does an excellent job with the characters’ eyes – they look slightly bigger than actual eyes, so they stand out just a bit, and she uses them beautifully to show the many emotions that the characters run through, from Nellie’s indignation at how the women are treated to the male characters’ paternalism, from the madness creeping into the minds of the inmates to the cruelty of the nurses. Sieh does a nice job with the interactions between the characters, true, but the way she alters the eyes draws in the reader and lets us experience everything that is roiling under the surface. There’s not a lot of action in the book, so Sieh has to do a lot subtly, and she does it well.

Ten Days in a Mad-House is an interesting comic, because it’s about an interesting topic. Ricca doesn’t have to do too much to make it a success, and so he simply makes sure he doesn’t screw it up (which sounds like damning with faint praise, but it’s shocking how often people do screw it up!). The story is compelling, and the art gives us an excellent glimpse of how bad things can get and what a system designed to punish instead of heal can look like. It’s a bit depressing that we haven’t come too far from those days (we’ve improved, obviously, but have we improved enough?), but it’s good to be reminded that things have been worse, and people can make a difference if they try.