As a teenager in the Bronze Age, Steve Englehart was one of my favorite writers. Looking back, I still love his stories, but I’m almost as impressed by the number of forgotten characters he resurrected. “Stainless” Steve took multiple characters who were, at best, bar-trivia answers (“The super-villain Immortus battled a)the Avengers; b)Immortal Man; c)Death; d)Vandal Savage.”) and made them viable again. 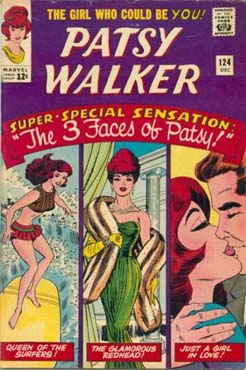 Englehart’s first resurrection work involved an A-lister rather than an obscurities he usually handled. Fun-loving teen Patsy Walker had been Marvel’s star property in the 1950s but “the girl who could be you” ended her comic-book run in 1965. In the early Bronze Age, Englehart added Patsy and her boyfriend-turned-husband Buzz to the cast of the Beast’s series in Amazing Adventures. Here we see Hank McCoy knocking on her door …

As we learned a few years later in Englehart’s Avengers run, Patsy figured out the Beast’s secret identity and agreed to keep it secret if he made her a superhero. Finding former superhero the Cat’s old costume, Patsy became the Hellcat and has been bouncing around the MU ever since: Avenger, Defender, wife to the Son of Satan and back in her own series for a couple of years as Patsy Walker, AKA Hellcat. Despite her former popularity, if Englehart hadn’t resurrected her, Patsy would probably be as forgotten as DC’s Swing With Scooter.

when Avengers #4 established Cap went into the ice before the end of the war, all his postwar years got retconned into non-existence. Englehart established that the 1950s “Captain America — Commie Smasher” had been a second man, William Burnside, who’d been driven insane by the super-soldier treatment and placed in suspended animation. Now he was running wild, pitting his narrow 1950s view of America vs. Steve Rogers’ more idealistic vision. Burnside has returned several times since, and other writers have brought the rest of Cap’s post-war adventures into continuity.

The second resurrection was Peggy Carter. When Cap met SHIELD’s Agent 13 (Sharon Carter, if you didn’t know), she reminded him of someone he’d once loved. Tales of Suspense #75 revealed it was a U.S. agent he’d known in WW II; two issues later, we saw them vow their love during the liberation of Paris but oops, the unnamed woman got too close to an explosion and wound up amnesiac. That was the last we saw of her until Englehart reintroduced her, identifying her as Sharon’s older sister. She’s still around in the MU and of course she’s been memorably portrayed by Hayley Atwell in the MCU.

Englehart also revived the Tumbler, a villain from the Silver Age I like — how many criminal claim Captain America as their inspiration? — but he only returned long enough for the Secret Empire to kill him, so he doesn’t really count.

Over in Avengers, Englehart brought back Immortus, a one-shot master of time who tackled the Assemblers in #10 as a member of the Masters of Evil. Things didn’t work out so well for the bad guys so the Enchantress retconned the whole issue out. That was the last we saw of Immortus’ “truly different villainy” until Englehart brought him back as the future self of Kang the Conqueror. Englehart also revived the Space Phantom, the one-shot villain from Avengers #2, and established him as an agent of Immortus. While the Phantom’s origins have been retconned a couple of times since, he’s never been more than Immortus’ lackey — but that’s still a higher profile than most one-shots get. 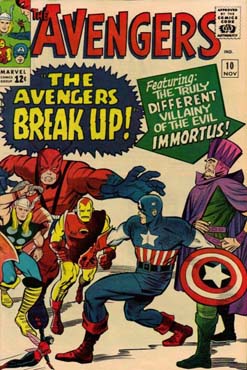 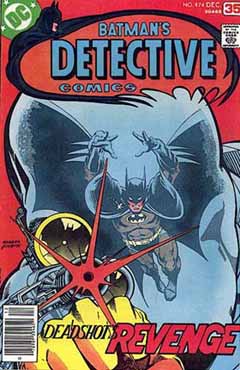 The same run also revived Deadshot, Batman’s one-shot (ROFL!) foe from the early 1950s. Floyd Lawton posed as a superhero but that was just a cover for his plans to take over the underworld (something for which there’s a real-world precedent); Batman, of course, spiked his guns (I’m funny, aren’t I?). His return in that fabulous Rogers costume was the start of a long comeback career including being a mainstay of the Suicide Squad. 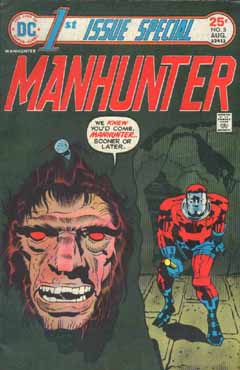 Last but not least, we have Manhunter. Jack Kirby offered a new take on his and Joe Simon’s 1940s crimebuster in 1st Issue Special but like most of that tryout book’s offerings, it didn’t go anywhere. Englehart’s work on Justice League of America brought back Manhunter Mark Shaw and the Manhunter cult he served, establishing the cult were actually android creations of the Guardians of the Universe. They’ve been around ever since and Shaw has appeared in both Suicide Squad and his own series.

That’s some creative use of old and forgotten properties, Mr. Englehart. My compliments.