Hi, and welcome to Comics You Should Own, a semi-regular series about comics I think you should own. I began writing these a little over fifteen years ago, and I’m still doing it, because I dig writing long-form essays about comics. I republished my early posts, which I originally wrote on my personal blog, at Comics Should Be Good about ten years ago, but since their redesign, most of the images have been lost, so I figured it was about time I published these a third time, here on our new blog. I plan on keeping them exactly the same, which is why my references might be a bit out of date and, early on, I don’t write about art as much as I do now. But I hope you enjoy these, and if you’ve never read them before, I hope they give you something to read that you might have missed. I’m planning on doing these once a week until I have all the old ones here at the blog. Today we have Kurt Busiek and Carlos Pacheco’s epic cross-time/space Avengers story. This was originally published on 22 August 2005. As always, you can click on the images to see them better, and watch out for SPOILERS! Enjoy! 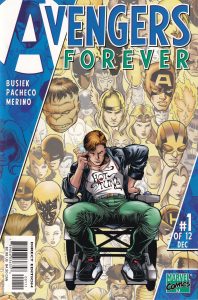 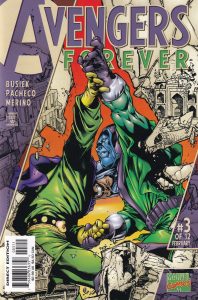 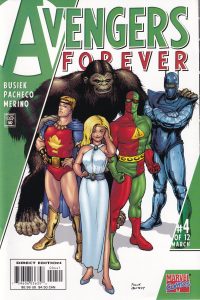 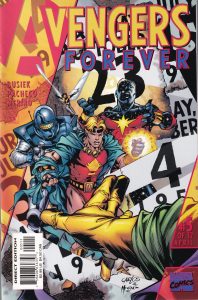 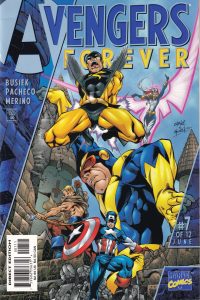 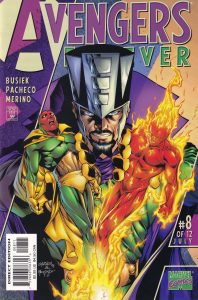 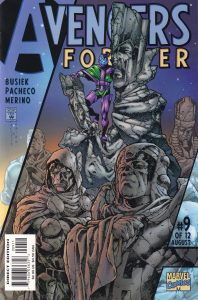 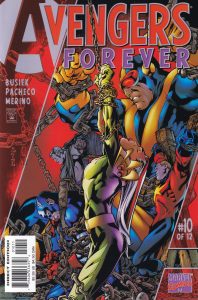 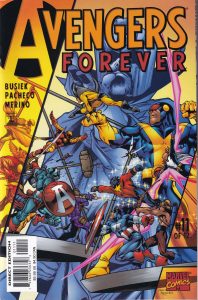 Avengers Forever should have had a bigger impact on the comics landscape, shouldn’t it? First of all, it’s an absolutely beautiful book. Pacheco’s art really began to take off with this book. 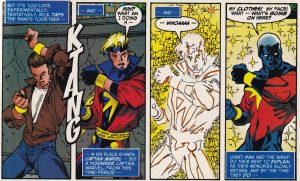 Second, it’s a compelling story that involves all of Avengers history – and I do mean all of it. Third, it introduced the new Captain Marvel to the Marvel Universe. I know Marv’s two subsequent series didn’t really take off, but still – it’s a significant event.

I’m not saying Avengers Forever didn’t have an impact, it’s just strange it’s not treated more like a watershed event in Avengers history, because it is. This is a sprawling epic of the kind we used to get in comics but don’t very much anymore [Editor’s note: I wrote this just when DC and Marvel began their crossover-itis up once again. Prior to five years ago, crossovers had been out of fashion for a while in comics]. Avengers Forever is that kind of story – it spans centuries and universes and packs dozens of characters into its pages, but it one way, it’s much better than the super-sized stories we used to get and are now getting again – partly because it’s the work of one creative team.

Busiek has a tight focus on the story he wants to tell, which raises it above the usual big-time story in that nothing contradicts anything in another book. This is a dense book, one that takes its time getting where it needs to go but never scrimps on the all-out action, and rewards you with a careful reading, because it holds up, despite so many opportunities to go off the track.

The story, boiled down, is somewhat simple. Immortus, “Master of Time!”, wants to kill Rick Jones. He is opposed in this venture, naturally, by the Avengers and their unlikely allies, the Supreme Intelligence of the Kree and Kang the Conqueror. Everyone knows that Kang eventually grows up and becomes Immortus, right? Well, I didn’t when I first read this, but luckily Busiek reminds us often that it’s the case. At the end of the first issue, Libra of the Zodiac helps Rick reach into the past and future and collect seven Avengers from different times to help him with the threat posed by Immortus. These Avengers are: Giant-Man (or Goliath) and the Wasp from the present day; Captain Marvel and Songbird from the future; and Captain America, Hawkeye, and Yellowjacket from various points in the past. This group will help fight Immortus.

Immortus, it turns out, is working for the Time-Keepers, three weird-looking dudes who watch over time. 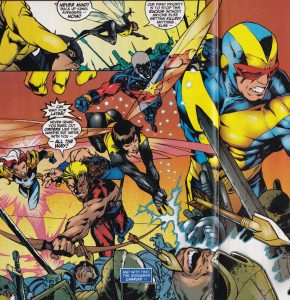 They are concerned that the human race, with Rick Jones as the catalyst, will develop awesome powers and take over the universe. So they decide to kill him. The Avengers fight back. That’s pretty much the whole story, although Busiek uses this to explore every aspect of Avengers history and show how it relates to this scheme of the Time-Keepers.

Yes, that’s right – this is a continuity-obsessed geek’s dream book. I want to look at how Busiek uses continuity to his advantage, because the actual breakdown of the issues would go on way too long. Suffice it to say that there are many fights, lots of dialogue, oodles of double-paged spreads, and a grip of pages with panels crammed onto them. Pacheco is up for it all, whether it’s the Old West or some distant planet in the future. In the last two issues, he draws practically every Avenger who ever lived, and each with stunning precision. I haven’t read JLA/Avengers [Editor’s note: I still haven’t], but I can’t imagine Pérez doing a more detailed job than what Pacheco does here. Anything Busiek throws at him he renders beautifully. The story, like I said, takes us all over the place, and we see the 1950s Avengers, the Empire of Rickard, dinosaurs in the Old West, Chronopolis – all leading us to the final showdown, when Rick meets his future self and realizes he’s going to be tied to Captain Marvel for a long time. 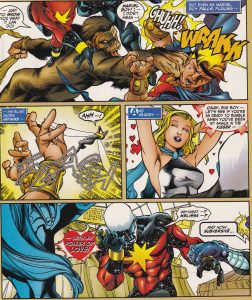 The reason this book rises above any other star-spanning epic is because it’s all grounded in Marvel history. This is where Busiek shines. There has been a trend recently to ignore Marvel continuity as too convoluted and difficult to understand. The Ultimate line is a result of this, but now, after six years [Editor’s note: Remember I wrote this some time ago], its continuity is becoming daunting for the casual fan. Whenever you publish titles that take place in the same world and last for years, continuity problems will ensue. Busiek shows us that it doesn’t need to ruin good stories.

Busiek is, of course, uniquely qualified for this kind of story. He’s been a comics fan for years, and an obsessive one at that. He’s also a very good comic book writer. In Avengers Forever, he simply sets about reconciling every contradiction in the timeline of the Avengers. That doesn’t sound too hard, does it? Well, it can be done, as Busiek proves. He shows how the Avengers could meet Immortus in ancient Egypt, how the Avengers could exist in 1959, why Libra has acted strangely in the past, and why Professor Horton claimed the Vision wasn’t the original Human Torch. He even throws in Lex Luthor for good measure (I kid you not). Avengers Forever is the work of a comics professional, who takes the time to read comics, understand them, and try to place them in their proper context. 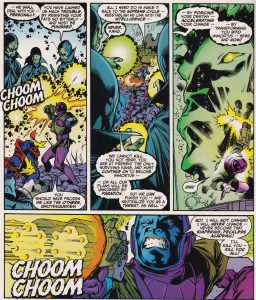 Busiek, who showed his obsession with history in Marvels and continues to show it with Astro City, is the kind of person you want writing this, because you’re guaranteed that he will know what he’s talking about when he puts Kid Cassidy in his comic. Ultimately, the story sets the stage for the next phase of Rick Jones’ evolution. It also re-establishes Kang as a major villain in the Marvel U.

Busiek’s use of Avengers from various times in their history seems arbitrary (it still does to me, even though he explains the choices), but it does allow him to show how the characters have changed over the years. The annoying thing about a lot of comics writers today is their ignorance of or disregard for history. Busiek knows that even the lousy stories in Marvel history have some merit, and he uses these ideas accordingly. It is somewhat arrogant of writers today to think that everything after Lee and Kirby and Ditko and the other Marvel pioneers is crap and they can simply build on what those gentlemen did. Busiek doesn’t share that attitude. He uses ideas from the mid-1990s in the book as well as stuff from the early 1960s. As he points out in the footnotes to the book (each issue has footnotes at some point), you don’t need to know all the stuff, but if you’re interested, there they are. Avengers Forever shows the mark of a good comic book writer. It’s a fresh, relatively unique story for which you don’t need to know all the minutiae (a little would help, but not all of it), but if you are a comics-obsessed geek, you’ll be in heaven. I rarely read the Avengers, but I enjoyed the story simply for what it was. 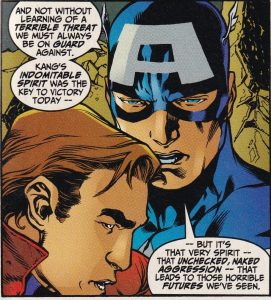 Busiek is able to keep it accessible while mining the 35-year history of Marvel’s greatest superhero team.

Avengers Forever is out in trade paperback, and I recommend it for anyone who has ever picked up a Marvel comic. It’s high adventure, thrilling fights, nice characterization, and an attention to detail that is breath-taking. It won’t change the world, but it will put the fun back into superhero comics for a while. And be sure to check out the archives, which are slowly being fixed! Slowly but surely!

[Once again, this is shorter than I would have liked. I would eventually write more about art, but Pacheco’s art on this series is truly wonderful, and, I imagine, incredibly hard, because he had to fit so much into each issue. He, Merino, and Oliff really make the book shine, even when Busiek is info-dumping all over us. I probably could have written a lot more about this, and had I written this today, I probably would have, mainly because I’ve read a lot more Marvel history since then, so I know more about some of the references Busiek makes in this book. Like a lot of epic historical dramas from the Big Two, this is probably wildly out of date, just because publishing moves on in directions no one can anticipate, but it’s still a very good comic and an important benchmark in Avengers history. Check out the trade paperback below – it’s good stuff!] 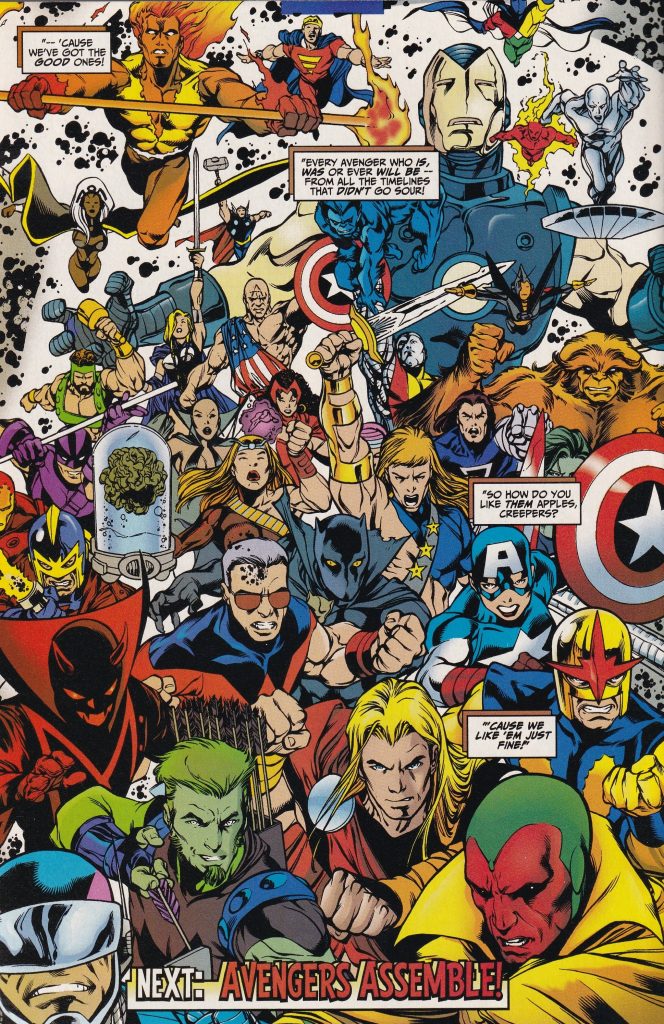