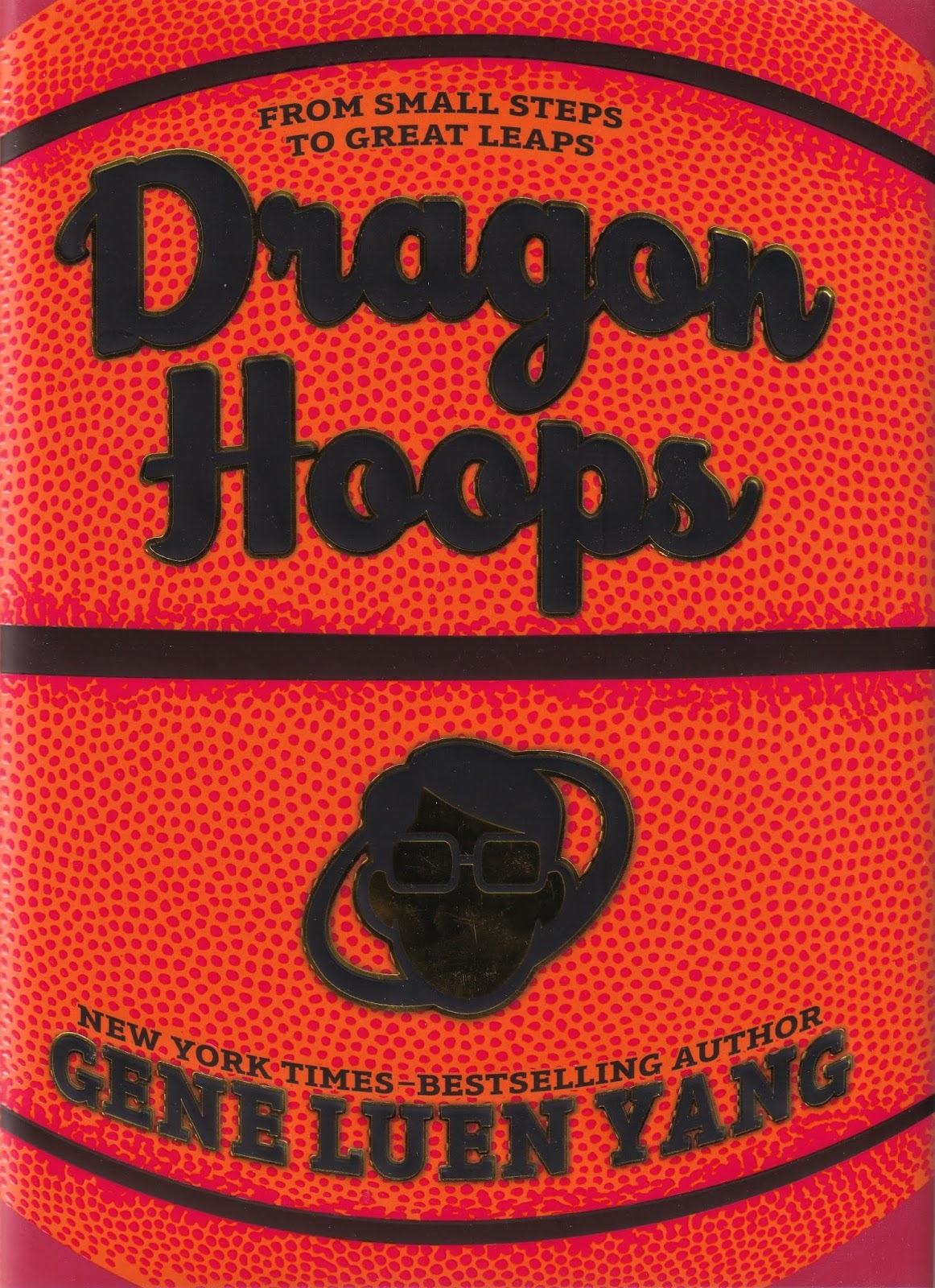 Gene Luen Yang has been an excellent comic creator for some time now, and a new book by him is always cause for celebration, so it’s nice that Dragon Hoops, his latest (published by First Second), has come out and we can all read it. Reading is, I’ve heard, fundamental. So let’s take a look at it!

Dragon Hoops is not quite as good as Yang at his best, but that doesn’t mean it’s a bad comic, just not as brilliant as he can be. 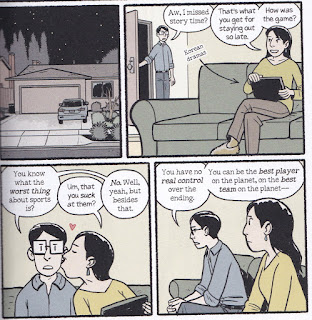 It’s still a very entertaining comic, with a lot of interesting bits in it, both from a story aspect and an artistic aspect. Yang tells the story of the Bishop O’Dowd High School Dragons basketball team, specifically the 2014-2015 men’s team, which he followed around with the blessing of the coach (he taught at the school for several years). I won’t tell you how the story ends (Bishop O’Dowd was a powerhouse school, but they had never won the state championship, so of course they make the title game again in this book), but you can easily Google it if you want to. What matters in the book is the people Yang writes about and how they change as they move through the season and how they help change him, as well. In many ways, this is a very traditional sports story – Yang follows the team, they lose early but win late, they all learn something, they overcome adversity (I hate to say this because it’s a true story so what happens in the book actually happened, but it’s too bad because it feels like a cliché), and they become better people. It’s nothing we haven’t seen before.

That makes it sound boring, but it’s not, because Yang is too good a writer. I mean, a rousing sports story is usually entertaining, even if you can see where most of it is going. There’s a reason why sports stories make such popular movies, and Yang – a self-professed sports hater at the beginning of the book – makes note of this a few times throughout the book. One thing sports always has going for it is that you never know the ending, because it’s unscripted, and Yang starts out hating that – as a comics writer, he’s tuned to the idea that heroes win, but his “heroes” – the kids at Bishop O’Dowd – don’t always win, because real life doesn’t work that way – but he eventually understands that the thrill of the unknown is part of why sports are so popular. 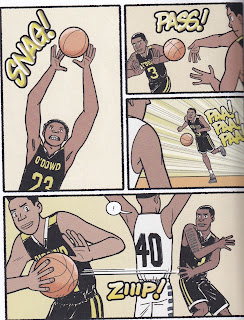 It’s not a deep thought, necessarily, but it does point out some of the misconceptions people who hate sports have about them, and Yang comes to it organically. So while we might be able to figure out how the book ends, it doesn’t end as dramatically as a fictional story would, because real life isn’t usually as dramatic as fiction.

Yang also doesn’t make it all about the season. His school appears to have a fairly diverse population, although it’s a private school, so it’s not surprising that a lot of the students are rich white kids. Naturally, most of the basketball team is black, and they come there because they’re good at basketball. Yang focuses on a few of them and examines how they came to the school and what their challenges are. He also writes about the Sikh kid on the team and the Chinese kid on the team, because they’re even more in the minority than the black kids. Yang gives us some different perspectives on how these kids see their school and the world (the Sikh kid, in particular, is interesting – in one section he talks about how much he hates Gandhi, which is fascinating). He lets them speak for themselves, and he also simply lets the world show how they react to these kids. Obviously, Yang can craft the narrative to highlight racism if he wants to, but the casual way he lets the kids talk about it and the way he shows it makes it more depressing than if it had been stereotypical racists chanting taunts. Yang also delves a great deal into the history of basketball, because he wants to understand the game, so those sections provide a nice backdrop to the main story and show how the game has evolved. He writes about the barriers to not only blacks and women, but even a tall (white) guy like George Mikan (the first great superstar of the NBA), who played at a time when tall guys, amazingly, weren’t seen as viable basketball players. Yang links the decisions made by people in the past to change the game with the way the players at Bishop O’Dowd had to make decisions about whether to play or not, and the book becomes more about taking chances than simply playing a game. 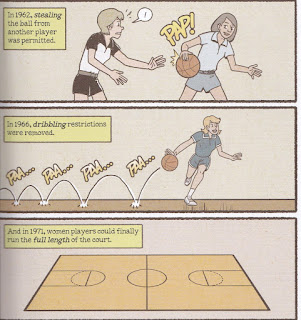 This comes full circle when Yang himself gets the chance to write Superman and decides to embrace writing comics full-time, quitting his teaching job in the process. He makes it clear that he couldn’t have done that without the example the kids on the team set for him.

Yang also wisely understands that he’s in a comic book, so he addresses that cleverly throughout the book. On one page, a character tells him he doesn’t like the way Yang drew his hair, and after Yang explains why he did it, the character’s hair magically changes from one panel to the next. His wife scolds him a few times for changing things to fit a narrative (like showing a conversation in person when it was conducted via text, which Yang, not incorrectly, says would be boring, visually), but then we learn that he never actually had the conversation with his wife, but he externalized an issue he was having in his head to make it visually interesting. These little things are neat to read because Yang pokes holes in the idea of an absolute true retelling of events, which can’t be done, and it helps the reader accept it more, as we understand that we’re getting one person’s version, which is probably not the complete version. This comes into play with the events toward the end of the book, which feel slightly clichéd. Yang makes sure to address them, but he also shows how a few different people react to them, so we’re not completely certain that there is a bad guy. Earlier in the book, Yang tells his wife he doesn’t want to write about the issue, but that’s just a lie to create tension, so when he does write about it (it’s definitely a Chekov’s gun), he feels like he’s doing it with reluctance. It’s done as well as it can be, but Yang wisely sets it up so that we understand it’s not the whole story, and it might be a fiction.

There’s a lot to like about Yang’s art, which is never flashy. He doesn’t seem like an artist who could handle the kinetic nature of basketball, but he does a pretty good job with that, which is, of course, fairly crucial. His art is fairly cartoonish, but that doesn’t mean he can’t do facial expressions well, and he does a really nice job throughout the book showing how characters react to things non-verbally. 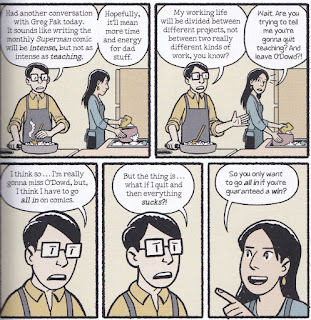 He likes to do consecutive panels of the same “shot” of a character, with just a different facial expression, showing how they’re working through something they might not want to say out loud, and it works quite well. He makes sure the kids look like kids, even if they’re big, because it’s easy to forget that when they’re on television and in pressure-packed situations like the ones Bishop O’Dowd finds itself in. So we always know that these are teenagers trying to bring vicarious glory to adults, and Yang does a nice job with that. He uses speed lines cleverly, and his sound effects work quite well in the context of the book. When he shows the history of the game, colorist Lark Pien uses the slightest sepia tones to set them apart, which works nicely. While his in-game work often feels like it’s taking place in a far vaster space than a basketball court, that affectation helps us focus in on the players he wants to highlight, so it’s not a bad thing. Yang’s art style is never going to change the world, but he’s a very good storyteller.

Part of my problem with Yang is that I love American Born Chinese so much that I want every book he does to be as good (this is definitely a “me” problem, I know). That Dragon Hoops isn’t doesn’t mean it’s bad in any way. Yang not only tells a good story, but he illuminates some things that nerds might not understand about sports and why people love them. He does this while also showing the toll sports can take on a person, even if he does that subtly. Sports, with its lack of predictable resolutions (even if you think the favorite will win, upsets aren’t all that uncommon), provides Yang with a handy metaphor for the uncertainty of life itself, and how taking chances can lead to great things or can blow up in your face, but the important thing is to take them. The book is entertaining, but as usual with the better comics creators, there’s a lot more going on than it seems at first glance. Yang continues to be a comic creator that you really ought to check out!