My friend Ross once described Man-Thing as the world’s most perfect supporting character. After reading Essential Man-Thing Vol. 1 (you can get many of the same stories in color in a new TPB) I see what he means. Even in his own series, Man-Thing, being mindless, has no real goals or agenda other than burning whatever knows fear; it’s the rest of the cast who have to carry the story. That works great when the cast are interesting, with strong tales of their own to tell; not so much when they’re disappointing. 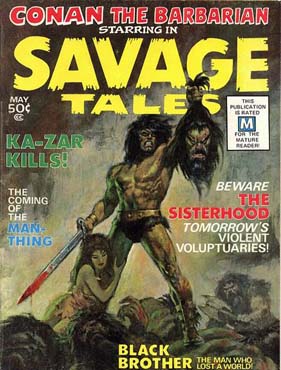 We first meet the Man-Thing in Savage Tales #1, courtesy of Gerry Conway, Roy Thomas and Gray Morrow. Scientist Ted Sallis has dragged his lover (later retconned to his wife) Ellen to the Everglades so he can complete his formula for turning ordinary soldiers into indestructible warriors (subsequently retconned into duplicating the original Super Soldier formula). Ted’s angsting over helping the military-industrial complex ends when Ellen sells him out to AIM. Fleeing, he takes the formula and transforms into what would later be described as “a shambling, muck-encrusted mockery of a man.”

It’s an unremarkable story, a pale shadow of Swamp Thing’s origin (regardless of which character came first). But after some guest appearances with Ka-Zar, Man-Thing got his own series in Fear, which Steve Gerber wrote from the second issue onward. As far as I’m concerned, Gerber (and his artistic collaborators, primarily Mike Ploog) gets the credit for turning Man-Thing from a one-shot as forgettable as Monstro or Oog into an A-lister

Gerber established that the swamp Man-Thing frequents actually contains a nexus of all realities; as a result, pretty much anyone can pop up. Demons. Ghost pirates. Immortal conquistadorss. Mad scientists. ETs. Howard the Duck. And, of course, regular people: petty hoods, losers, psychos, corrupt developers, supervillains. Like a freaky-looking horror comics host, Man-Thing introduces us to each month’s guest stars but lets them drive the story.

That fit very well with Gerber’s strengths as a writer. He said once that he wanted to create a book where pretty much anything could happen, and he certainly succeeded. In one issue, Man-Thing’s fighting to stave off a demonic invasion; in another he and sidekick Richard Rory try to save the soul of a suicidal clown from oblivion in the afterlife. Gerber gave us a religious zealot called the Fool Killer who decides to destroy Man-Thing because he believes Sallis’ research is an abomination unto God. In another tale a henpecked swamp rat has to flee his wife’s demonic wrath, alongside his dog. A story by Tony Isabella brought Ellen back and gave her a surprisingly effective redemption arc. 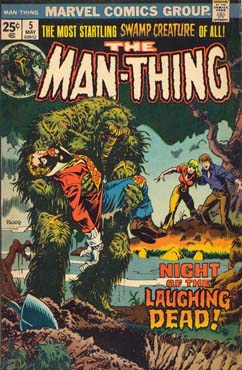 Through it all, Man-Thing never speaks. He has no goals or agenda beyond surviving and, of course, destroying whatever knows fear, so he can adapt to thrillers, horror, personal drama, whatever story Gerber has an itch to tell.

The downside is that when the story’s guest stars aren’t interesting, Man-Thing can no more save the story than Cain can fix a crappy issue of House of Mystery.  For example, Man-Thing #12 is supposed to be a gut-wrenching story about a writer who just can’t deal with the horror of living in the modern world, but it comes off insufferably whiny (the agony of the creative soul is a popular topic with writers, but it rarely leads to good results).

Wundarr is another example. Steve Gerber’s Superman riff in Fear had no purpose other than doing a Superman riff. It’s not a satire or a metacommentary or anything of the sort, it’s just “Look! Marvel’s done a Superman!” Gerber tried reusing Wundarr in Marvel Two-in-One without making him any more interesting; neither did later stories reinventing him as the Aquarian. The cast in Chris Claremont’s later Man-Thing run were dull, and so were the stories. 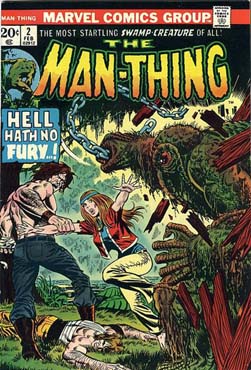 One flaw in Gerber’s writing that annoys me a lot is that he rewrites the rules whenever it’s convenient (much as he did with Dr. Strange in Defenders). Man-Thing’s mindless yet in Fear #12, for example, he suddenly remembers how to tie a broken arm. He hates fear and has to destroy it, but in Man-Thing #2, he saves a terrified Richard Rory instead of attacking him. I can overlook it because this is such a good series, but it’s still a flaw.

Although Man-Thing will never take Swamp Thing’s place in my heart, he’s well worth reading.