“He’s the hairy-handed gent who ran amuck in Kent; lately he’s been overheard in Mayfair” Not too long ago, Jason McNamara and Greg Hinkle decided to self-publish their comics (great timing, as McNamara admitted to me, but it’s still pretty cool), and they funded some stuff through Kickstarter. He let me know about it, but for various reasons, I didn’t get around to promoting it (one of those reasons being, of course, that I suck). 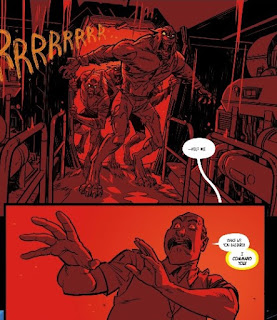 The other day, however, he saw that I was out of new comics to read (it’s true!), so he sent me a .pdf of Nocturnal Commissions #1, the series he launched with Hinkle. So here’s where I write about it!

McNamara is a good writer of horror, as he has a nice, twisted sensibility, and he also has a great sense of humor, so this book, which is a horror/humor blend of genres, is in his wheelhouse. This is a fairly typical “gathering the team” book, as McNamara introduces us to the principals and then adds one more character to form a trio, who will then, presumably do their thing, which is investigate weird things having to do with monsters. In issue #1, two of the three have already founded their business – Bradford Peterson is a vampire, and Mathias Tillman is a werewolf. A guy Tillman knows called them to an island used by rich people to do … whatever (presumably hunt Ice-T), where a submarine has beached, and said sub apparently contained something odd. From the prologue, we know that one dude on the sub turned into a werewolf and quickly infected the rest of the crew, but the sub was carrying something fairly dangerous, and it turns out it’s an undead (well, not really, but close enough) rock star named Alton Allen, who can animate and manipulate (and speak through) the dead. Allen, of course, has a story about how he came to be undead and why he was on the submarine, and that forms, it appears, the basis of the plot. I won’t give it away, but it should provide a decent through-line for the series for a while, if McNamara and Hinkle want to stretch it out. Or it could easily be resolved in a few issues. I don’t know what the plan is.

The book isn’t exactly scary – it’s not really meant to be – but McNamara does a nice job with the weirder stuff. His work on the characters is quite good, though, establishing them very quickly through a few simple sentences. Peterson has been around for a while, so he’s far more genteel than Tillman, who flies by the seat of his pants. 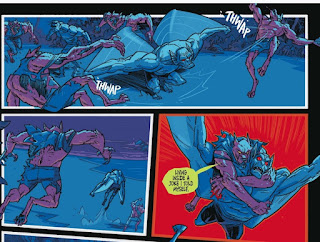 He bluffs through every situation, it seems, as he doesn’t seem quite as together as he pretends, but he does scrounge up business for their venture. At one point, McNamara shows that these people are, after all, monsters, when Peterson muses that he doesn’t give the business much of a chance and they’ll soon be back to eating people. It’s funny, but also a bit disturbing, and it hints at the darkness behind the premise. What happened to Alton is played the same way – it’s awful, but McNamara doesn’t get too gloomy with it, so the tone of the book doesn’t get too dark. That way, Alton’s undead condition can be tragic without bringing us down. Tillman and Peterson embrace their monsterness, and while Alton hasn’t yet, the balance between the two founding members of the group and their acceptance of who they are nicely contrasts with Allen’s somewhat more depressing predicament. McNamara can be a dark writer, and I imagine he’s setting some of that up, but he also wants to not bring us down too much. That’s always a delicate balance, but McNamara has always been good at it.

Hinkle is a very good artist, and while his style has evolved over the years so it’s a bit smoother than it used to be, he still has a good, angular line that gives his art, which is slightly cartoonish, a nice edge to it. He does very nice work with the werewolf beginning, turning the sub into a claustrophobic space that the werewolves tear through quickly, heightening the carnage quite well, and when Peterson and Tillman are attacked later, he does nice work, especially with Peterson, shifting him from the gentleman to the vampire. He’s always been good at action, so the fight scenes work very well, and because his work is so detailed, the undead parts of the comic look nice and gruesome. 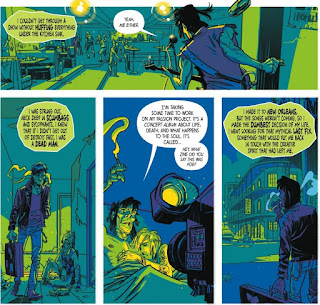 Hinkle, like McNamara, never lets the horror aspects get too bad, so even though the undead werewolves who attack our heroes are decaying, Hinkle walks a good fine line between them being slightly gross and being too icky. Hinkle is good at the less active moments, too – Allen’s journey from rocker to undead is done well, as Hinkle gets the seediness of a declining star well, while the scenes where Peterson and Tillman introduce themselves to the other characters (and therefore, to us) are filled with nice moments of facial expressions and body language to show how different the two principals are from each other, even though they appear to have a mutual respect for each other. Hinkle is also the colorist (with assistance from Paul Little, who does the flats), and while the colors are what you’d probably expect from a comic like this, that doesn’t mean they’re not terrific. Hinkle uses reds and greens very well in the opening sequence, which makes the blood pop a bit more (the book is not terribly gory, but there’s still blood, because there has to be), and when Tillman and Peterson are chillin’ later on, he uses blues and yellows to stunning effect, too (red/green and blue/yellow are complementary, so they make each other pop more when they’re close together). Hinkle really shines when Allen gets into his flashback, because he uses putrid green as his base, which makes Allen’s life look sickly even before he becomes … whatever it is he becomes. It’s very neat.

I don’t know how long McNamara and Hinkle plan to go with the book, but it certainly has the potential to go a long time. It’s a fun set-up, sure, and the basic idea isn’t new, but the devil, as always, is in the details, and both these gentlemen are skilled creators, so the book zips along nicely. Plus, both of them are really nice dudes, so there’s that. If you’re at all interested in checking this out, check out this link, where you can get it and some other comics they’ve done recently (here’s my review of The Rattler (sans pictures), which you can get at the link). I mean, we’re all kind of sitting around these days, so why not check out some dudes making comics all on their own?